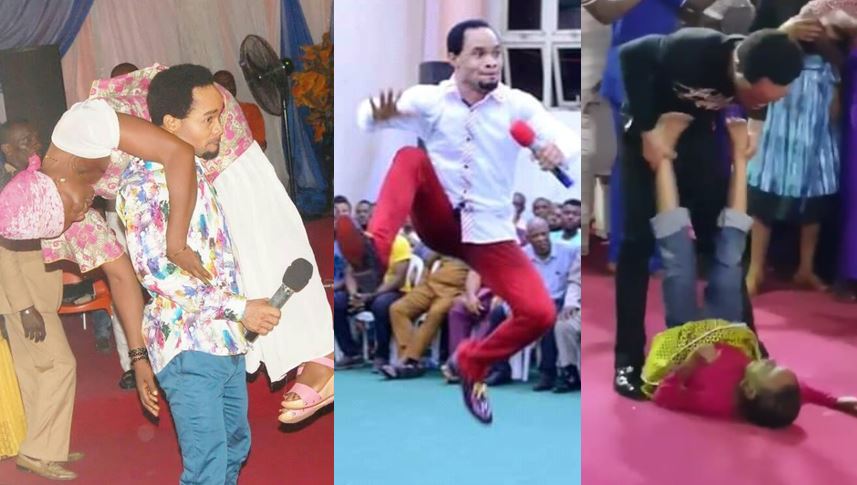 Like empires that rise and fall, the social media space, most importantly Nigeria’s, periodically witness tons of slangs, parlances, or some locally crafted jargon that rent the social space for a while before another is reborn.

The trend is often exciting and hilarious, putting into consideration that the words that make them up are either strange, remodelled, or simply recycled. It is one of the major reasons, like kingdoms, these words trend for a while then die off to give way to another.

Of the very many words renting Nigeria-netizens is that of none other than that of one of the most controversial pastors in recent time, Prophet Emeka Odumeje who regards himself as ‘The Lion’ among a host of other names. While the focus is not on the jungle king name, this post seeks to clear the air on the meaning of Indaboski Bahose, a weird but funny name that Emeka Odumeje calls himself.

So we ask that you tilt your heads backward a bit and relax as we explore not only the weird name but other names associated with the controversial pastor himself.

Indaboski Bahose is a self-named title associated with Emeka Odumeje who calls himself ‘The Lion’. The strange words ‘Indaboski Bahose’ are supposedly drawn from speaking in tongues; a phenomenon, majorly associated with Pentecostal Christians across the world in which people speak words that are apparently in languages unknown to the speaker.

Although it is believed that speaking in tongues is a heavenly language that ought to be dynamic and not repetitive, an indication that one is not true is the repetitiveness of any supposed tongues which not only implies that is crammed, possibly learnt or faked but also crafted for the purpose of deception.

In most of Emeka Odumeje‘s videos where he referred to himself as ‘Indaboski Bahose’, it is either he addressed his congregation or that he thought to go the way of a self hypeman which he does by according himself all forms of strange names seemingly taking after Hebrew words, the main language of the original Bible texts.

Other Nicknames of Emeka Odumeje

‘Prophet Chukwuemeka Odumeje’ has many nicknames, some of which are:

Indaboski Bahose, the lebadu, the lemande, the abidoshika, the liquid metal among a host of many other names ‘Prophet Chukwuemeka Odumeje calls himself are words he fancies with no proper understanding of the things he says. Most of his videos have suggested he loves fantasy and has not only found a way to make his fantasies happen. If he is not John Cena with an ‘attitude adjustment’ move in one of his services, he is likely to be Brock Lesnar in another, taking his loyal followers to ‘suplex city’. Either way, we are sure that newer names will be added to his already nicknames.

We believe he thinks he is a member of the Avengers who goes by the name ‘Liquid Metal’.

25 Slangs Only Nigerians Can Understand

Meaning of Propaganda: What it is, Meaning and Concept

The Meaning of Amotekun: Which Animal is Amotekun?

Meaning of Clout Chasers and its Origin

Meaning and Types of Subpoena

The Meaning of Cabal in Nigeria

The Meaning of Marlian in Nigeria

The Meaning of Audio Money

The Meaning of Indomie Generation